The Ease of Doing Business (EoDB) index is a ranking system established by the World Bank to compare Business Regulations in 190 economies. The key objective of this exercise is to scrutinize the relevance and requirement of all Acts, Rules and Regulations/compliances. Efforts are being made to simplify, rationalize and digitize Government to Business and Government to Citizen interfaces, in order to decrease time and cost burden and improve Ease of Doing Business for industrialists/investors. Department for Promotion of Industry and Internal Trade (DPIIT) has adopted the concept and implemented a series of reforms in collaboration with States and Union Territories (UT’s) in India to strengthen the business environment of the country.

Maharashtra is the most favoured destination for industries owing to its well-developed infrastructure, skilled workforce, strategic location with good transportation network, progressive sectorial policies, one of the best incentive policies and much more. The Ease of Doing Business (EoDB) initiative by Government of Maharashtra is intended to foster further conducive business environment for the new as well as existing businesses/ industries/ commercial establishments etc. in the state of Maharashtra and also to be recognized as one of the leading states in India in terms of smooth business facilitation and support paraphernalia.

Towards this end, Directorate of Industries, Government of Maharashtra has been spearheading the State-level Ease of Doing Business program for a very long time and endeavours to improve with each passing year. Special focus is also on the city of Mumbai as it is one of the two cities in India along with Delhi, to be considered for the World Bank led Doing Business evaluation of countries in the world for the forthcoming Doing Business Report 2021.

World Bank started country level ranking among the chosen 190 countries in the year 2009. Each year, World Bank publishes Doing Business Report after conducting a thorough assessment of the business reforms of the selected economies. In 2014, Government of India launched an ambitious program of streamlining regulatory reforms aimed at making it easier to do business in India. Since then, India has made a substantial leap upward and has emerged as one of the most attractive destinations not only for investments but also for doing business, by raising its ranking from 142nd in 2014 to 63rd in 2019 as per World Bank Doing Business Report 2020. The ranking involved assessment of two Indian cities for Country level ranking namely Mumbai and Delhi. 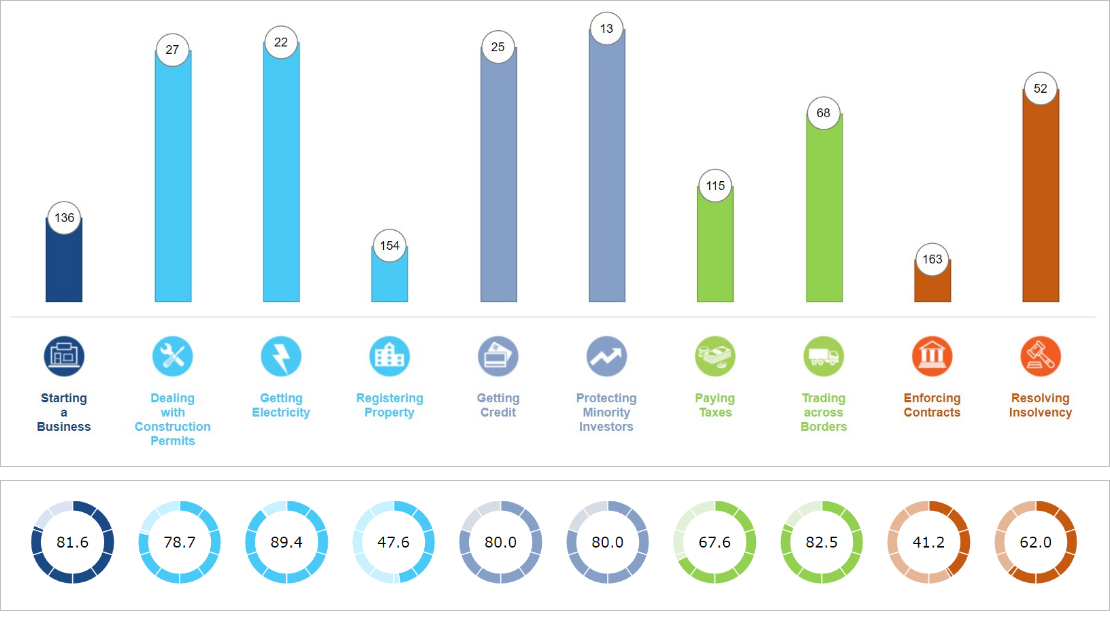 Construction Permits: India’s ranking on this parameter has improved from 184th in 2014 to 27th in 2019. This improvement has been mainly on the account of a decrease in the number of procedures and time taken for obtaining construction permits in India.

Getting Electricity: India’s ranking on this parameter has improved from 137th in 2014 to 22nd in 2019. It takes just 53 days and 4 procedures for a business to get an electricity connection in India.

Apart from the above-mentioned improvements, India ranks 13th in Protecting Minority Investors and 25th in Getting Credit indicators respectively.

DPIIT, in coordination with States and Union Territories (UTs), has undertaken a series of reforms to improve the business climate in the country. Starting with a 98-point Reform action Plan in 2014, successive State Reforms Action Plans (SRAP) have been released by DPIIT covering more areas of reform. The objective of the Action Plan is to layout the series of reforms targeted at increasing transparency and improving the efficiency and effectiveness of regulatory framework and services for businesses in India.

The Action Plan for the year 2020 consists of 301 Reform points spread across 24 Areas. In 2016, DPIIT released a 340-point BRAP. It included recommendations on 58 regulatory processes and policies spread across ten reform areas spanning the lifecycle of a typical business.

Department for Promotion of Industry and Internal Trade (DPIIT), Ministry of Commerce & Industry, Government of India has released District-level Business Reform Action Plan (DIBRAP) 2020 to facilitate Ease of Doing Business in States and Union Territories at a more granular level.

Government of Maharashtra recognizes the need and essence of the Ease of Doing Business program and having invested significantly at the capital and State-level, now wants to take it further to the district level. The DlBRAP 2020-21 comprises of a total of 45 reform points that are required to be implemented at the local-level offices (districts and Urban Local Bodies) across all 36 districts in Maharashtra. This is expected to ensure enhanced Ease of Doing Business at the ground-level and aims to make several Government to Business (G2B) services online.

The DLBRAP reforms encompass creation of online systems for service delivery with no physical touchpoint for application and mandate service delivery timelines under relevant act to facilitate businesses.

Being the State with maximum investment, domestic as well as FDI, Ease of Doing Business is an important initiative for Maharashtra. The State has been actively participating in ‘World Bank Doing Business’ and ‘Ease of Doing Business’ activities of DPIIT. To facilitate businesses 103 government services are integrated with single window portal – MAITRI (Maharashtra Industry, Trade and Investor Facilitation Cell). Taking this initiative further, Government of Maharashtra is now committed towards Reducing Regulatory Compliance Burden in the state. The entire exercise is divided in two phases viz, Phase 1 and Phase 2.

Simplify, Rationalize, Digitize and Decriminalize Government to Business and Citizen Interfaces in order to decrease time and cost burden and improve Ease of Doing Business for industrialists/investors and Ease of Living for citizens.

Minimization of Regulatory Compliances in 2 phases: